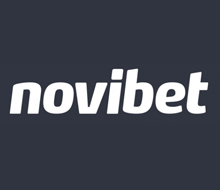 T&Cs Apply
If the name of this casino sounds familiar, it’s because Novibet has been around for the last eight years, having been launched in 2010. As such, it’s like a grandparent of the industry, having weathered changes newer sites haven’t been able to. Yet, it looks as new as the day it was made, even more so, with its polished interface dropping you straight into the action. Not that the design is cluttered, simply that Novibet introduces you to the titles as soon as possible, as well as allowing you a brief overview of the promotions on offer.

We’ve already given you a bit of background information, primarily that of its establishment, but that doesn’t mean that you now know all that there is to know about Novibet. In fact, we’d wager there’s plenty more for you to learn, such as the licensing that’s in operation. You see, every reputable iGaming website needs to provide a license, otherwise it’s an illegal operation; in regards to Novibet, there’s a single license in play. Typically we see a dual license from casinos, but here there’s only one from the UK Gambling Commission.

Not that this is an issue, as it’s one of the most well known among the governing bodies. What is more, it paints a clear picture of the gamers allowed to join, with the restricted countries great in number, including territories like France, Turkey and the United States. These are the only countries mentioned in the terms, but there’s more that aren’t revealed, and so we advise you to be mindful of such when attempting to register.

If you’ve taken the time to explore what Novibet delivers to users, you’ll have noticed that there’s a lot more going on than standard casino activities, with a sports betting section available, as well as virtual sports. Due to this fact, the promotions are separated into these categories, with the casino related ones few in number but great in depth and value of rewards.

What we find most interesting, refreshing even, casino offer a Novibet welcome bonus what takes a more conventional format, with a small 100% deposit bonus available, with the extra monies reaching a value of up to £100. This can only be triggered upon the first allocation of money, with further deposits not receiving extras thereafter. What is more, there’s a rollover necessity of x35 that needs to be met before a withdrawal can be made from your account. Before we move on, we’d like to point out that Neteller and Skrill users are unable to qualify for this deal.

Once you’ve journeyed further into the Novibet scene, you’ll come into contact with the promotional calendar, as well as the two deals of the week, the latter of which change every seven days. Naturally, there’s variation available here, though not as much as we’d have expected from Novibet casino that’s been around for as many years as this one has. In addition to the regular rewards, there’s also a VIP club and a loyalty scheme, with the club being based on the number of credits collected in order for you to move up the levels. As for the loyalty scheme, that’s also based on the credits won, but with you given rewards for meeting certain milestones.

So far we’ve been pretty balanced in our reactions to Novibet, but as we move into the games sections, we find an excellent example of how user friendly navigation can be. This label hasn’t simply separated game types, but has also separated those activities down further, so that users can easily locate the title they wish to play. The titles on display come from top brands too, such as NetEnt, Microgaming and Evolution Gaming, just to cement its prestige even further.

Incorporated inside the easy navigation is the fact that there’s a variety of outlets, from pokies to instant wins to live casino dealers (as well as the betting we mentioned earlier), and so you shouldn’t become bored all that quickly with Novibet. Coupled with this is the knowledge that the vast majority of these games can be played via your mobiles, as indicated by the little icon on each of the corresponding thumbnails. All of these minor details come together to create a polished, impeccable iGaming label that we can be confident in using.

We had hoped to continue this review without so much as a hitch, but sadly we come to the banking, or should we say finding the banking info, and soon find ourselves struggling. There’s no clear FAQs, if any at all, and so we have to browse the terms, a feat that isn’t made easy by the sheer number of subsections. Eventually though, we were able to uncover that major payment methods, like Visa, Skrill and Mastercard are permitted, with users able to bank in EUR and GBP.

As for details in reference to limits, etc, that was another matter we found hard to uncover, with us having to use the site and other reviews in order to create a fuller picture. Ultimately, we learned that withdrawals can take up to seven business days, and that both types of transactions require at least £10 or over before going through. It’s common for most websites to follow similar dynamics, but still, it would have been helpful if Novibet had been more clear.

When you finally get to the support page, you’ll see that there’s several options available, such as Skype, Live chat, fax, email and so forth. The fact that fax is included goes some way to show how inclusive this label is trying to be. That being said, it also shows how dated some of the assistance outlets are, and so we say proceed with cautious and only use methods you know well. As for the operational hours, they’re said to be around the clock.

For the most part of this review, and our experience, we found Novibet to be one of those rare finds: a casino that has it all. However, as we got into the nitty gritty of it all, we found that there were some elements of the interface that could be improved, such as the banking information. It’s not a deal breaker for us, but we think it may be for some potential users out there, as it makes interacting with the site less than streamlined.